For each step of the waterfall analysis, the Smart dimension identifies the pair of dimensions which is most relevant in explaining performance variation. It comes in addition to the Combined dimension which crosses all dimensions.

To activate Smart Dimension, click in Settings and switch on the Smart dimension button. Combinaison of smart dimension will appear in the waterfall only if they are more relevant than an alone dimension. 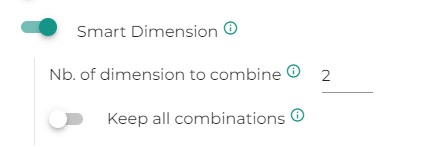 Since it implies a longer computation time, this option is off by default. However, we recommend you turn it on if you have a small set of dimension (less than 10).